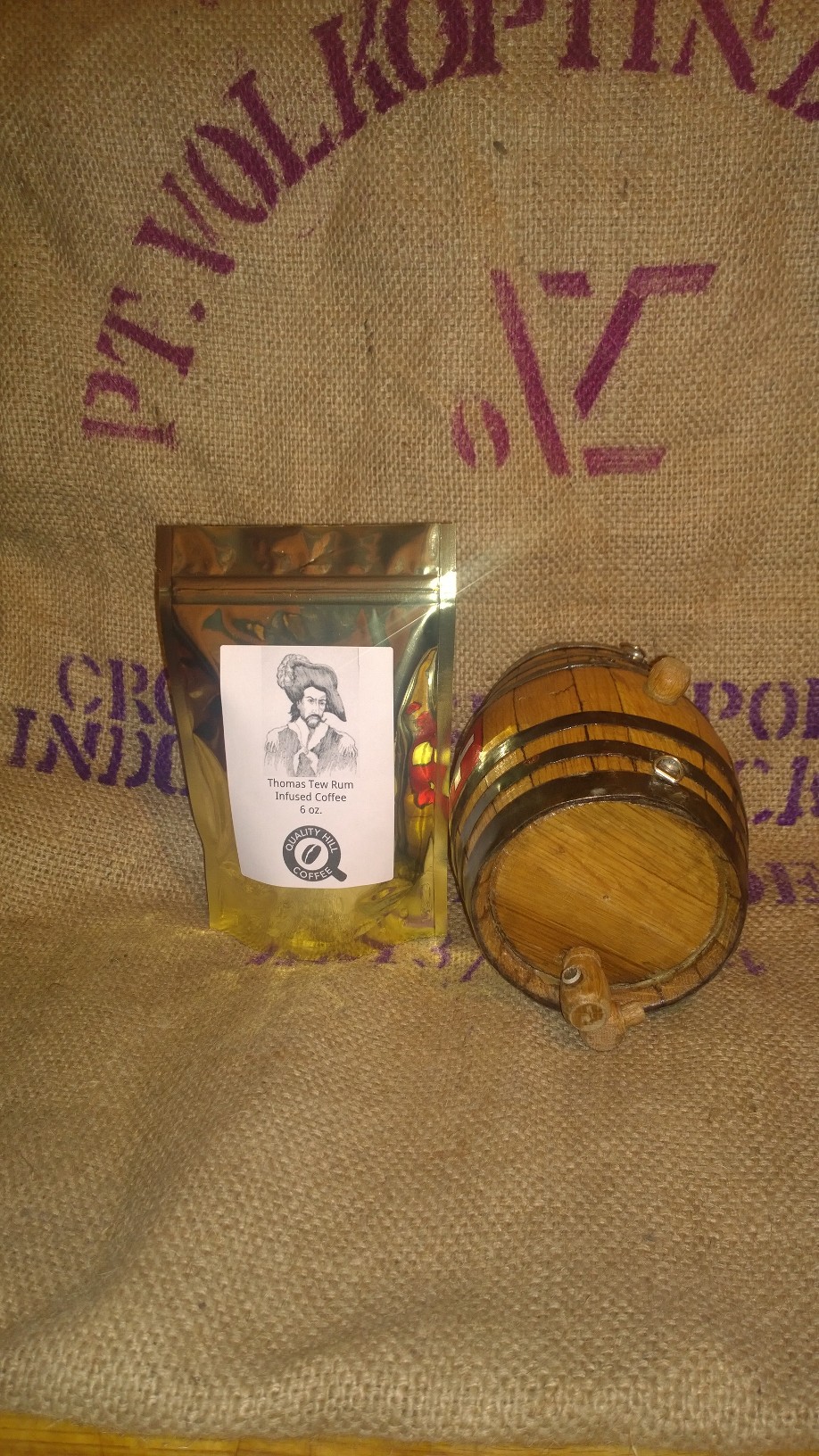 My wife and I travel to Newport Rhode Island each summer and love this Rum. I wanted to create a barrel aged coffee without using Bourbon barrels. The small barrel used along with infusions of the rum into the oak barrel. The Green coffee beans are put into a small batch and aged for several weeks and each day rum is added to the unroasted coffee. Very Limited! Only small amounts can be roasted at a time.

In the 17th century Thomas Tew was a privateer and pirate who sailed out of Rhode Island and Bermuda. He is most noted for discovering the sailing route known as the Pirate Round in 1693. The route began in the Western Atlantic down to Africa, then to the coasts of India and Yemen. While his career as a pirate was brief, the route captured the imaginations of sailors at the times and encouraged others to attempt the route.

It was during this time that the rums produced in Rhode Island and other colonies were created using molasses with copper pot stills. As the British cracked down on the manufacturers with

various taxes and tariffs, the distillers all went out of business or switched to distilling whiskies. Due to this, Rhode Island rum became something of the distant past.

That is until 2007, when the Newport Distilling Company was granted the license to produce rum. Using a 105 gallon copper pot still and aging the rums in used Bourbon barrels, 2008 saw the return of Rhode Island rum to the market place with the aptly named Thomas Tew Single Barrel rum. Over time they have expanded distribution to three states and continue to amass a loyal following that are fans of traditional craft distilled rums.

The dark amber rum is secured in a 750 ml bottle by a plastic cork sealed with black wax. The front of the bottle displays the Thomas Tew logo in white and notes on a small label that it is hand bottled, with the barrel number noted. This review was from a bottle produced from barrel number 145.

For me, Pot Stilled rums are always fun to explore. Depending on the region of the world and distiller, each one brings its own unique flavor and funkiness that cannot be found in most column still rums. When I smelled the aroma of Thomas Tew it was no exception. I detected a nice funky mineral note, sulphur, charred oak, vanilla, molasses and a very light apricot note.

The first sip provided a lovely wash of sweet caramel balanced by smoky oak. As the oak fades a strong hit of vanilla comes into play that is punctuated by another pop of oak that is married with a light hit of sulphur and apricots. The apricot and mineral note linger into the finish.

Thomas Tew Single Barrel rum is an interesting and fun exploration into the world of craft distilled pot still rums. Distilled to 84 proof, it provides a nice punch and a flavor profile that lends itself to be a nice sipper for those brave of heart, or a good versatile rum that can play well with a long range of rum cocktails. In some rums a sulphur note can be a deterrent to this, but in this case it is just subtle enough to augment fruit and syrup flavors in such a way that it

accentuates the cocktails. Over the years I have heard some fuss about this product costing 40 dollars. However due to the fact that the rum is made using a small pot still with a focus on classically styled production methods, in my mind at least it is money well spent. If you discover this rum on your travels I believe it is a worthy addition to your cabinet. It is currently in three states in the North East United States with plans to expand in the near future.