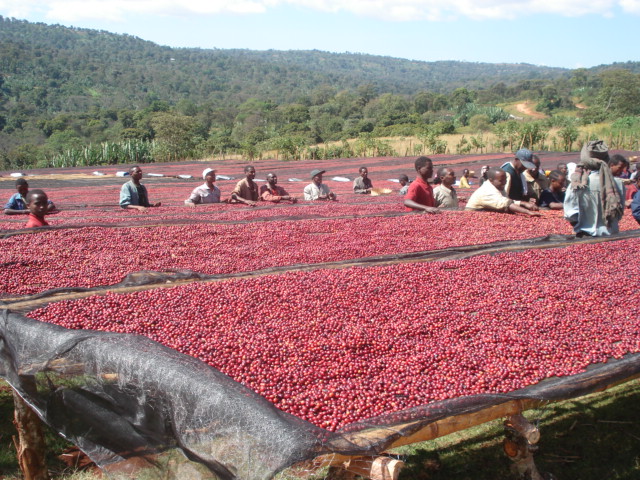 A dry processed coffee, where the fruit dries around the beans, originating in the south-central mountains of Addis Abada. It displays the highly sought after berry notes that can come from this region and process. At a light roast this coffee delivers overwhelming fruitiness, sweet and syrupy strawberry, cherry flavors with earthy blueberry tones and chocolate-citrus notes at the finish. This is a nice coffee but not as rich and full bodied as the Sidamo Ardi .

Ethiopia is the birthplace of Arabica coffee, and one of the finest coffee-producing countries in the world.  The legend of how coffee was discovered tells the story of a goat breeder discovering coffee by watching his goats act strange after eating the fruits of an unfamiliar tree. He took the fruit’s seeds to the nearest monastery, where the monks prepared a tea from them. The monks then felt very energetic and stayed awake all night long. After the monks discovered the effect of the beans, the news was shared from monastery to monastery. Coffee was then transported from Ethiopia to Egypt and Yemen and so on.

Ethiopia is the birthplace of Arabica coffee, and is home to some of the most diverse varieties on the planet. Due to this the cup profile can vary drastically, but certain regions produce coffees which are distinctive. Yirgacheffe is traditionally known for its perfumey jasmine, floral, and citrusy characteristics. Naturally processed coffees from Yirgacheffe have proved themselves to be an amazing alternative to the traditional offerings from Harrar and Sidama. The cup profile is the beautiful simplicity of Yirgacheffe with strawberries and cream thrown in the mix, while Harrar/Sidama is known to be clasically more jammy and wild with a distinct blueberry note.